Twice a year, the department I work for gets everyone together for an outing. Our summer outing is our "fun" outing, while our winter outing is more work related. Today was our summer outing and this time we went to Adventure Park USA, a little park located outside of Frederick. It was a cute little park although there wasn't much for a pregnant lady to do, unless you like arcades...which I can only handle so much of. We played miniature golf when we first got there, which was a good thing since the game took us 1 1/2hrs and by that point it was starting to get really hot. I think the Go Karts were a big hit as I know many of my coworkers drove them multiple times throughout the day. The rollercoaster also had a number of riders although I'm not sure that I would have ridden that even if I hadn't been pregnant...it was a tad rickety looking. All in all, it was a good day. A nice day to get together with fellow coworkers outside of the normal work environment...and I even made it home before the beach traffic backed the traffic up too badly at the Bay Bridge.
Posted by _ at 7:52 PM 19 comments:

It is only the beginning of June, right? The temps the last 3 days have been incredibly hot for this time of year...95 degrees with a heat index over 100. Was a good weekend to stay inside in the air conditioning. Unfortunately, that was not be the case on Saturday. The day started off with Andy and Kenzie leaving to go to Laurel for a tournament that was to last all day. They ended up playing 6 games...well 5 and the start of a 6th which ended up getting called due to a nasty storm that came through. Kenzie's team was ahead 1 - 0 so they ended up as Champions. Yay Lightning!

My day started with having to get Connor to a Wade-In where he was volunteering. Unfortunately, there was some miscommunication on where the Wade-In was being held but I managed to finally get him there, albeit a tad later than we'd said. This is an annual event that is held at the Chesapeake Bay Environmental Center. The objective of the wade in is to see how far you can walk into the water before you can't see your shoes anymore and then to measure the depth. The hope is that each year you can walk in a little further which would mean that the bay is getting cleaner. Connor ended up being the kid from his youth group that showed up to volunteer which was disappointing but they were very thankful that he came.

The twins had a baseball game at 3 and boy was it hot and there wasn't a hint of a breeze. It took over 1 1/2 hrs to play 2 innings at which point the other coach asked his team if they wanted to play another inning or quit then (games have a 2 hr time limit) and I was very thankful that they all voted to stop them. Of course, the twins coach wasn't happy about the decision...he wanted to keep playing...but I could have cared less at that point. Everyone else wanted to go home. Taylor got to pitch in the first inning for the first time and he did a great job...got two strike outs, walked a couple, and had a few hit off of him. Tyler ended up making the third out of the inning which I thought was pretty cool. Then in the second inning, Tyler made an awesome throw from third base all the way to first base and ended up hitting the running on the helmet as he stepped on the bag. It was pretty funny! and just goes to show you why you wear helmets during the game.

Ending the game early worked out well since I had to get Tay, Ty and Connor to the high school for select soccer tryouts. We were able to go home and get changed without having to rush around like chickens with out heads cut off.

After I dropped the boys off, I decided to walk across the field to where my parents were participating in the Relay for Life. I chatted with them for about an hour before it got too hot for me and I had to leave...ended up back there an hour later when I came back to pick the boys up from tryouts. They enjoyed having a short chat with their grandparents. The relay ended up getting cut short at about 11pm due to some pretty nasty storms that came through the area.

The good news from the soccer tryouts is that Connor got picked up by one of the teams. It's a team that he had actually practiced with a little last fall and the coach has decided to officially pick him up for the coming season. That's great news except it means we have to travel to Centreville for practices every Wednesday night. Maybe my parents will feed me dinner since they only live a few miles down the road from where they will be practicing.

We finally made it back home and jumped in the pool just in time for it to start lightening. Grr! That's the only sure way to get the kids out of the pool fast...usually you have to forceably drag them out. I did have a little time with Keari in the pool before the lightening started and she loved it. I think she's going to be another little fish.

Today, most everyone except me, Alex and Keari, went kayaking on the river....even some neighbor kids came along. From what I hear, everyone had a great time kayaking and swimming. They all came back and jumped in the pool for awhile.

I felt kind of bad for Alex...he spent the entire weekend studying for his finals which start tomorrow. He had to write two essays and a timeline for history which took him forever to do, the it was on to Biology. Those will be over with tomorrow, then it will be gym (which is a paper that he's already done) and Religion on Tuesday, Spanish and English on Wednesday and Math on Thursday. Hopefully Thursday will be a nice day because his class is getting together for an end of year party after the last exam.
Posted by _ at 9:49 PM No comments:

Tonight was mom's surprise retirement party and she was very surprised. Everyone did a great job of keeping it a secret. It was held at The Narrows which has a lovely waterview that you can enjoy while eating. There were about 30 people there that she works closely with everyday and everyone was commenting on how strange it was going to be not to have there at the start of the school year in the fall. She's been there for 30 yrs and I know it's going to be strange for her not to be there for the start of school. On the other hand, I know she's really looking forward to not having an agenda to follow everyday. She'll have the time to put into her flower beds, crafts, bike riding, etc...things that she has to try and fit in now...she'll be able to enjoy at her leisure soon. She got some lovely gifts...one of which was a hand crafted bracelet that was designed by a guy she's work with at Josten's for years. She doesn't officially retire until June 30 so while she held up very well at the party today, I know the 30th will be hard for her. And I'm totally jealous as I'd love to be able to retire but that is nowhere in my near future. ;-)
Posted by _ at 10:28 PM No comments:

A Good Day to be a Duck

So far we've had almost 2 inches of rain since last evening. Everything was already saturated from the rain we had the other day so the w

ater is having a hard time finding places to go. Our corner was completely flooded out earlier this evening...brought back memories of Hurricane Isabelle. Here's a picture of the latest approaching storm...nice dark clouds heading our way...which have reached us at the time I'm typing this and are dumping tons more rain on us. I'm just very glad I'm not driving in it...did that on the way home but at least it was light out then. It took me an extra 45 minutes to get home.
Posted by _ at 8:51 PM 2 comments:

I had my dentist appt this after
.noon to fix my broken tooth...which didn't end up getting fixed. He took a look at my tooth...checked out the edges to make sure they were sealed, checked to make sure my filling still looked intact. That all being good, he said he would prefer to wait until after I have the baby before doing the crown. Even though the numbing agents haven't been shown to have any ill effects on an unborn baby, he'd prefer to error on the side of caution. He did say to let him know if I started having any pain with tooth, at which point he would go ahead and do the crown regardless of whether we'd had the baby or not, but he's not expecting to have any issues. Let's hope he's right. So my visit took all of about 10 minutes during which we talked and filed my broken tooth a little so that it wasn't quite so rough...it feels much better. And now I'm off the hook for a few hundred dollars until hopefully the end of November. ;-)

And an unexpected bonus was the extra of working at home...and with gas prices the way they are now, I sure won't complain about the.
Posted by _ at 7:31 PM 2 comments:

Today was the last piano recital for this school year. It always ends with a recital that their teacher hosts where all his students play a song and then he does a summary of all the activities done over the past year. Students either get recognition or awards for performances done throughout the year. Kenzie was unable to attend this years recital but Taylor and Connor participated. It was a good thing too, since Connor received a number of awards this year. I didn't realize how many things he had participated in until his teacher kept calling his name.

Below is a picture of the awards he received. He received one for getting 3rd place (Honorable Mention) in the Solo Festival & Competition, one for have the highest score on the National Guild Auditions, one for highest average amongst his teachers students, one for playing in the Young Musician's Solo Festival, one for participating in the Chamber Music Festival and I can't remember what the others are for. 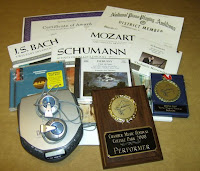 And here is a picture of Taylor's awards...he was nervous about performing this year so didn't participate in too many performances. His award was for particpating in the Young Musician's Solo Festival. 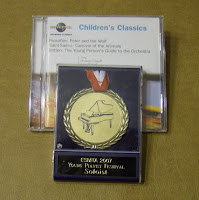 And these are Kenzie's awards. She also didn't participate in too many this year due to conflicts with softball games. I can't remember what her two awards were for. 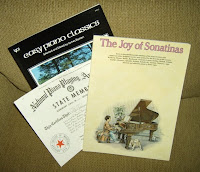 This Day in History
Match Up